Sihanoukville Province is divided into four districts, each with a distinct economic character, defined by size and location. In addition to the port and the growing tourism industry, the activities of countless NGO's and international investment have contributed to an unprecedented economic growth of the province over the course of the last decade. Economic sectors that further deserve mentioning are the textile industry and the rapidly expanding real estate market.

Sihanoukville town: The town’s layout reflects little structural planning. Neighborhoods accumulate around the major road "Ekreach(English.=independence)". It winds along the headland's rolling hills and halfway between Victory Hill in the north - and Ochheuteal quarter in the south are banks, shops, the local markets, hotels, administrative facilities and most corporate businesses. The post office and the inter-provincial bus station are located towards the north between Victory Hill and the port.

The main reason to visit Sihanoukville is the beaches. They are not as crowded as many of those in Thailand, but can be camped on weekends and holidays.

Victory Beach : (South of the commercial port). Plenty of budget accommodation nearby on Weather Station Hill. This beach is close to the seaport. Victory Beach sits at the base of the popular Victory Hill. Victory Beach offers one of the best sunset views in town but unfortunately the beach is partially closed and there are no longer any BBQ shacks or other vendors. Farther north along Victory the beach narrows and a few upscale seafood restaurants hug the water’s edge and a couple of casinos can be found on the beach road.

Independence Beach :  Independence Beach gets its name from the deserted hulk of the 7 -storey Independence Hotel at the north end. Locals call this beach 'otel bram-pil chann (hotel 7-stories). It is labeled '7-Chann Beach' on the in-town street sign. Independence is more than a kilometer long, but the sandy area is much narrower making the beach best when the tide is low.

Sokha Beach : Owned by Sokha Beach Resort, it is private but you can access it by paying a couple dollars. You won't have many people begging or trying to sell you something here. Midway between Independence and Serendipity lies Sihanoukville’s prettiest beach, 1.5km-long Sokha Beach. Its fine, silicon-like sand squeaks loudly underfoot. The tiny eastern end of Sokha Beach is open to the public and rarely crowded. The rest is part of the exclusive Sokha Beach Resort. Tourists are welcome to enjoy the sand near Sokha but are expected to buy something to drink or eat.

Ochheuteal Beach : Ochheuteal Beach is a long and narrow strip of white sand beach located in Sangkat No3. The northern section has now become known as Serendipity Beach, a popular beach with western tourists, noted for small guesthouse rooms right on the beach. There are around 30 beach huts serving good value meals and a wide selection of drinks, and a cluster of mid-range hotels and restaurants near the MP base in the middle. Grass umbrellas, rentable beach chairs and little drink huts line the beach from one end to the other. A number of budget traveler/backpacker oriented bar/restaurant/beach hangouts have sprung up offering chairs, umbrellas, drinks and a chill-out atmosphere.

Serendipity Beach : Guesthouses and bar/restaurants right on the beach, open until the early hours. This beach seems to be the most popular and typically has the greatest number of people on the beach. Serendipity Beach is connected to Ochheuteal beach. Be wary of a group of child thieves run by a Fagin type character. Any unguarded belongings on the beach will be picked up and searched for valuables with the refuse thrown back onto the sand. If you are walking on the beach during the night be aware because they will jump at you pretending to be festive and cheerful, but in the mail time they will target your pocket.

Otres Beach : Amazing 4km long stretch of clean, white sands. Less crowded and definitely more relaxed than other beaches in Sihanoukville. It starts with a strip of beach bars and guesthouse called Otres 1 followed by a 1km long public beach that ends at Otres 2 - another (smaller) strip of beach bars and guesthouses. Otres Beach is great place for lazy sunbathing, partying and some other activities also available (catamarans, windsurfing, kayaks, various boat trips, buggy cars, bicycles and jet skis). The beach bars of both strips have a rich bar, sun beds and a local food / western food menu. Most of them also feature bungalows or simple rooms.

Koh Rong is located about 25 kilometers from Sihanoukville, in the Gulf of Thailand. The island has 43 km of beautiful sandy beaches along both its Eastern and Western shores; its main attraction.
Most visitors stay in guesthouses and bungalows situated along the beach at Koh Tuich Village (Tui Beach). There are isolated resorts on other beaches. The atmosphere at Koh Tuich is very relaxed and beach focused during the daytime, followed by loud partying until late in the night, especially close to the pier. Travelers looking for isolation or peace and quiet should consider accommodation at the far end of Tui Beach or on other beaches.
With 23 white sand beaches to choose fr0m Koh Rong has plenty to see and do. For the adventurous there's plenty of trekking to be done through the relatively untouched jungle. Diving and snorkeling is excellent both off the beach and at sites nearby. But above all the best attraction is the phosphorescent water which sparkles when disturbed like twinkling stars. Best seen in around 4 feet of water and on a dark part of the beach. Because Koh Rong has minimal development and light pollution the conditions are perfect for the phosphorescent plankton and it can be seen every single night.
Be sure to head to Long Beach, either by foot through the jungle or by long tail boat.
Also be sure to check out HIGH POINT ADVENTURE PARK, this is the newest activity on Koh Rong and has without a doubt the best views of the ocean, the jungle, and the main beach on the entire island. Perfect place to take some very envy evoking pictures of this incredible island. 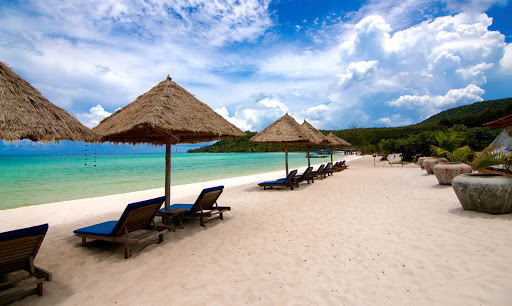 The Island of Cambodia Map