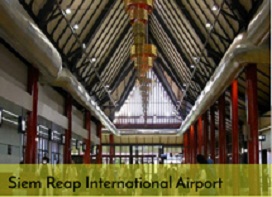 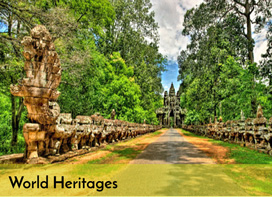 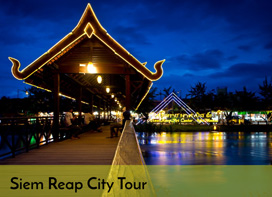 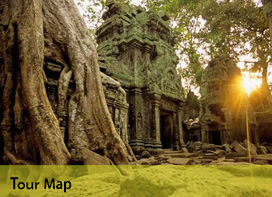 Siem Reap is the capital city of Siem Reap Province in northwestern Cambodia, and a popular resort town as the gateway to Angkor region.

Siem Reap has colonial and Chinese-style architecture in the Old French Quarter, and around the Old Market. In the city, there are museums, traditional Apsara dance performances, Cambodian cultural village, souvenir and handicraft shops, silk farms, rice-paddy countryside, fishing villages and a bird sanctuary near the Tonle Sap Lake.

Siem Reap today—being a popular tourist destination—has a large number of hotels, resorts, restaurants and businesses closely related to tourism. This is much owed to its proximity to Angkor temples, the most popular tourist attraction in Cambodia.

Angkor Wat : Angkor is the ancient capital city of Cambodia, the largest city in the pass of Khmer Empire. Angkor Wat is the largest Hindu temple in the world . This temple is very great and incredible with its splendor and perfection, it is unmatched as a heart in Asia. The wonder of Angkor Wat is beautiful, romantic as well as impressive and grand. Anyway it is the largest religious structure in the world. This temple is an expression of the Khmer art at its highest point of development.

Many people who have not been to Angkor Wat might think it is only one more monument in the world.  But for Cambodian people this is an erroneous idea because of its beauty, its perfection in composition, balance, proportion, reliefs and sculpture which make it as one of the finest monuments in the world for us. 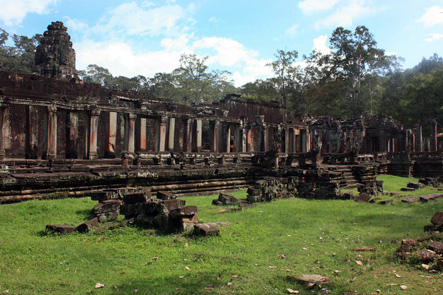 While its basic structure and earliest part of the temple are unknown, it is clear that Bayon temple was built on the top of an earlier monument and that the temple was not built one time. It was the Gold Tower with four faces and there are 54 tower which represent the Khmer provinces in the Great Khmer Empire Period (Angkor period). The iconography of the four faces represent the Bodhisattva Avalokiteshvara – Lokeshvara – and it is generally accepted that the four faces on each of the towers are images of King Jayavarman VII, which means the omnipresence of the king. And it also symbolizes the four smiling face as charming smile, sad smile, glad smile and beautiful smile. There are about 200 faces.

Ta Phrom : Ta Phrom was built under the reign of the powerful king of Angkor, Jayavarman VII in mid-12th century to early 13th century (1186) and consecrated to Buddhist cult and dedicated to his Royal Mother Prajnaparamita (the statue was placed in the central tower). Ta Prohm is a state of beauty which is investigated with delight and left with regret. It is one of the most interesting temple.

All of you who have arrived at Ta Prohm will find out by yourself with a feeling of mysterious, amazed and romantic because Ta Prohm comprise the special characteristic of nature which takes over the ancient temple by the giant trees growing over the temple. This is the greatest view in the world. More ever there are many big trees growing on the temple building for making the visitors to understand how the temples in the Angkor area look liked after five to six hundred years they had been abandoned. 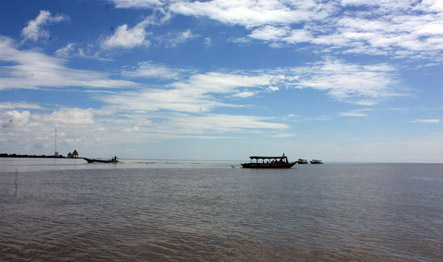 Its dimension changes depending on the monsoon and dry season. During raining season from June to October, the lake is filled by water flowing from the Mekong with 14 meters in depth and expands the surface of 10,000 square Kilometers. The passenger ferry from Phnom Penh to Siem Reap (6 hours) travels up the Tonle Sap River, stopping at Kampong Chhnang, and travels straight across the lake. It is a good way of viewing the Tonle Sap and all activities on it, if a little speedy.

The passenger ferry between Battambang and Siem Reap (5 - 8 hours) crosses the north western corner of the Tonle Sap, but spends the majority of the journey on the Sangke River. It is considered by many as the best boat trip in Cambodia.

The Tonle Sap and its many floating villages can be accessed from Siem Reap, Kompong Phluk, Kompong Khleang, Phnom Penh, Kampong Chhnang, Kompong Luong, and Battambang. At all these locations on the lake, tourists are able to rent a boat and driver. Price varies, and is per person, or per boat.

Old Market : Psah Chas (Khmer: ផ្សារចាស់, literally "Old Market"), is a market in the city of Siem Reap in northern Cambodia. Not to be confused with the similarly named Psah Chas in Phnom Penh that is geared toward locals, this open air market in the south of the city caters to locals and tourists alike. The market is such a fixture in Siem Reap that most businesses give their address in relation to Psah Chas. 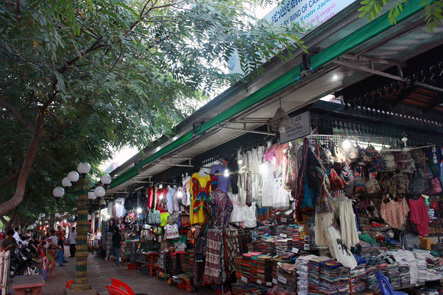 The market is popular with tourists in the city and sells souvenirs but it is also known for its variety of Cambodian cuisine, and has a number of food stalls which sell a variety of rice, dried fish and pork sausages, vegetables and fruits, and a Cambodian specialty Prahok, a type of fermented fish paste. Some stalls sell baguettes and spiced frogs, which is believed to be a relic of French colonialism in the area. Other stalls cook up various Khmer soups and red chili slices and peanuts.

Night Market : A good reason to visit Siem Reap is the Angkor Night Market. The first of its kind in Cambodia, Angkor Night Market was founded in 2007 with the prime mission to restore as well as preserve traditional Khmer handicrafts while alleviating poverty and improving the lives of Khmer people.

Luckily, locals and visitors have embraced this unique concept, and the original 100 stalls have now grown into a cluster of 250 or more over the years. Designed and constructed in a simple and traditional way, this night market is bounded by a Balinese themed garden and largely reflects the Khmer culture and heritage, with its well laid out thatched hut style stalls – all made using natural raw materials such as bamboo and wood.

Pub street : As one might expect, the focus for most visitors to Siem Reap are the ancient temples of Angkor, visiting the great Tonle Sap Lake, and other daytime activities. But to think that there is not much to do after dark, would be wrong. After all, this is a tourist town. The liveliest areas in Siem Reap after dark are Pub Street, the Old Market area, the alley and lane off Pub Street, and the Night Market area. Most venues are frequented by either tourists or expats, but some establishments attract both types of customers. Closing times vary widely, and range from about 12 midnight for those places that are restaurant-bar combinations, to the early hours of the morning for hardcore bars.

No matter what your taste, for both drinking and dining, there are many venues to choose from for a fun evening out. While the nightlife in Siem Reap doesn’t even come close to that of Thailand, or even Phnom Penh, you should be able to find what you are looking for. From intimate and stylish places for a quiet cocktail, to Khmer disco type paces with very loud music, to bars with very attentive ladies, there is something for everyone. See below for a few venues we have reviewed for you.

Angkor National Museum : Angkor National Museum is an archaeological museum dedicated to the collection, preservation and presentation of Angkorian artifacts, also to provides information and education about art and culture of Khmer civilization, with collections mainly dated from Khmer Empire's Angkor period circa 9th to 14th-century. Most of the artifacts are discovered in and around the Angkor archaeological sites nearby. The museum is located in Vithei Charles de Gaulle No. 968, Siem Reap, Cambodia, on the way between downtown Siem Reap to northern road leading to Angkor ancient city.

Opened on 12 November 2007, the Angkor National Museum covers the golden era of the Khmer Empire, making use of audio-visual multimedia technology. The museum covers Khmer history, civilization, and cultural heritage in eight galleries. The museum has a strict no-photos policy.

The museum is owned and operated by Thai Vilailuck International Holdings, based in Bangkok. It is currently displaying archaeological objects borrowed from the Cambodian National Museum in Phnom Penh. Another source of artifacts is the Conservation d'Angkor, a storage facility of some 6,000 pieces created by the École française d'Extrême-Orient in 1908 and currently in the hands of the Cambodian Ministry of Culture